When I look back on my life, the summer of 1984 holds a special part in my heart, and in all of those memories, Neil Young is playing in the background.  I finally got to go to one of his concerts in 1986.  Alan Davis, my boyfriend at the time, got me the tickets for my birthday.  My sister Diana, and her boyfriend at the time, Jeff Barbe went with us.

The stage was designed to look like a garage that the band used to play in and even had remote control rats that ran across the stage.  Neil Young's performance was outstanding, and I remember singing along with most of the songs.  After the last encore, Neil ran back out and pulled a big plug.  The house lights went out, and the show was over.  I also remember how the entire coliseum smelled like cannabis, and that joints were being passed from person to person throughout entire sections.

I paid $15.00 my shirt, and again, I can't remember when I stopped wearing it or where it went...Only picture of a shirt on-line I can find: 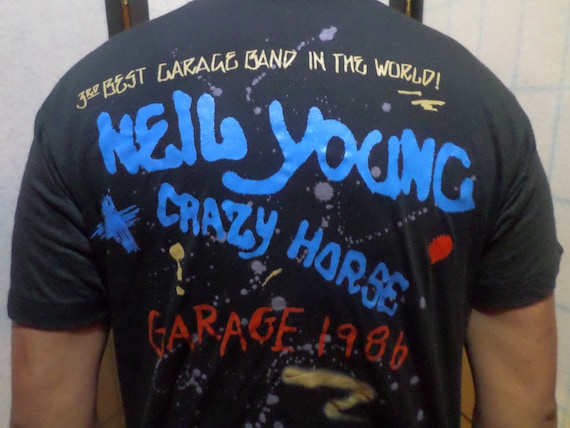 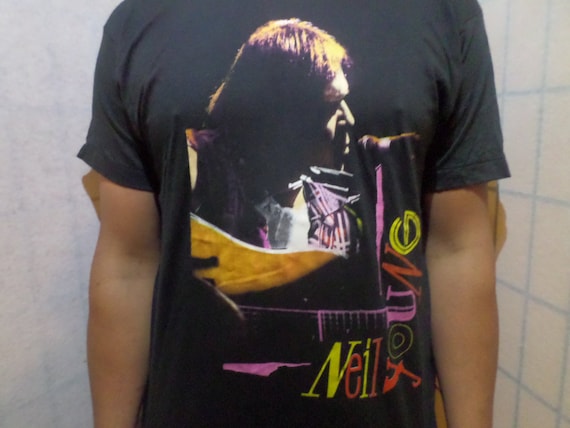 Set List:  Mr. Soul / Cinnamon Girl / When You Dance I Can Really Love / Touch The Night / Down By The River / Heart Of Gold / Inca Queen / After The Gold Rush / Too Lonely / Opera Star / Road Of Plenty / Cortez The Killer // Sample And Hold / Computer Age /Violent Side / Mideast Vacation / Long Walk Home / The Needle And The Damage Done / Hippie Dream / Powderfinger / Like A Hurricane / Hey Hey, My My (Into The Black) // Prisoners Of Rock 'n' Roll

Aerosmith, at Richfield Coliseum, was the first concert I ever went to.  My boyfriend at the time, Alan Davis, bought the tickets to celebrate our graduations the next week.  Him from Crestwood High School, and me from Bloomfield High School. We had fourth row floor seats.

Before the show started, I went to the bathroom and literally bumped into Ted Nugent.  He flirted with me, but he made me nervous because he wasn't wearing a shirt, and I didn't know who he was.  I just said excuse me and hurried by.  Boy, was I surprised to see him on stage when I returned.  Alan, my boyfriend, didn't even believe me until later when Ted pointed at me from on stage and smirked.  I just grinned and shrugged at him.  I felt pretty embarrassed at the time, but now looking back, the whole thing makes me laugh.

Once Aerosmith started playing, people swarmed towards the stage.  Even though I was so close, I had to stand on my chair to see anything.    Everyone was cheering and singing along.  The energy of the entire show was amazing!  Steve Tyler was shaking his butt and strutting all over as he played.

The only downer of the night was that the five young guys in front of us were very drunk.  Eventually one of them threw up and passed out on his chair with his arms hanging behind him.  His friends ditched him, so I kept checking his pulse to make sure he was still alive.  At the end of the show, and  I don't know why I didn't do this sooner,  I had to go get  a security guard to help him.